The Conduit Gongs @ Evolvefest, The 4th annual EVOLVE Music and Yoga Festival a festive gathering for progressive, fun-loving and visionary people who wish to celebrate their creative human potential and explore ways to make life on Earth more harmonious, joyful and sustainable! The Evolve vision centers on our power to move forward as ONE family, aligning with our Planet and with all beings.… Meeting Justin and Karin at the Vibes we shared an immediate connection that opened the doors wide for possibility. They quickly set up a date for us to visit them at their eastern imports shop overlooking the
picturesque Rockport Harbor pier. What a trip! Looking out the back of the Floating Lotus store, we had the… Exploring the world of Montessori was an amazing experience of wholesomeness and proactivity. We had the pleasure of closing out the schools staff retreat with our sound meditatiom concert. At The Conduit Center, we are delving into new avenues of achieving wellness. Beginning this summer, we initiaed the exploration into the world of Tai Chi. We brough in our resident master, Shane Waldron, to
give us an interactive look into the practice and art of QiGONG and Tai
Chi. Keep an eye out for yoga functions coming int September, National
yoga appreciation… Our close friend Luke put on his 10th annual summer festivity. The event incorporates the Stafford Art Initiative, with a long list of quality music and our blend of healing arts. Our 3rd year back
returning keeps the patrons guessing in eager anticipating as to how we
keep expanding our offering.…

The Conduit for Kids - Music Workshop We have developed a new direction of programming directly appealing to the mind of a child. With a new workshop scripted each month and plans to extend the concept remotely we seriously hope to impact the of so
many with the potentiality of youth. Up in the beautiful Green Mountains of Vermont the Sun-Do community hosted us for a sound-healing workshop. The acoustics of thespace were truly something powerful to experience. We've gone International! OpenMind was a consciousness festival where we headlined! with multiple stage performances, shared gong sessions, taught workshops, and participated in opening and closing ceremonies.
Whew! Such a heady community helped us really feel so connected and
appreciated,.…

Gathering of the Vibes 2010 The Conduit returned to the beautiful Seaside Park in Bridgeport, CT for the Gathering of the Vibes. It featured great musical acts such as Further, Primus, DSO, Nas & Damien GONG Marley, and many more
top-notch performers. We represented our peaceful gong retreat where
over 1000 took in the positive vibes we were… Jeff and Travis helped bang away in support of the Cystic Fibrosis Foundation. The Great Strides puts on "Walk-a-Thon" events to raise money for the cure for cystic fibrosis. The walk took place at the serene Wickham Park, right across the street from the Center. So naturally our team was out there, excited for another opportunity to spread good vibrations in the community. On Thanksgiving day over 15,000 people ran in the Manchester Road Race in Manchester, CT. The Conduit was there to gong the entire race.

On September 9th 2009, a celebration in triple digits of Nine Nine Oh Nine
The Conduit set out on a hike up a mountain in the People's State Forrest in Pleasant Valley, CT. Our beloved guide, and fellow member, Heidi Laura pointed our spiritual compasses with care.. To a divine sacred place, where our group and the gongs could become one with nature.

As we soaked in the sunshine, and endless rejuvenation of majestic… Continue

Luke semi-annually throws a bad-ass event not-to-be missed. He invited us for this one at the Stafford Rod and Gun Club back in April and we knew that we needed to be a part of it. Photo by Kahlil Calavas
Awake lent us their dome to really make an impression on his guests. Jim, Emily, Jeff and Owen worked the group format and worked until after the sun's light broke Sunday morning.

Rhythmic Circus rocked out the spot for… Continue

Our good friend Kahlil from Awake Productions put together this 3-D visual tour of our beautiful setup at the vibes!~ It helps remind us of how close we were to the crashing waves on the shore. What a sweet sonic addition to our sanctuary. Gathering of the Vibes 2009

We had an amazing time at Gathering of the Vibes in Bridgeport, CT. Using the Gong Chair to give personalized massages as well as a mass gonging set up with up to 15 people laying down and experiencing the vibrations at once! We paired up with Awake Productions (http://www.awakeproductions.com) who specializes in creating amazing geometrical structures. They set us up with a large geodesic dome… Continue "At night, the forest comes alive with lights that change colors, illuminating the trees and florescent art. If you feel like relaxing more, you can get a vibrational sound massage courtesy of The Conduit. You just layback… Continue

Get Gonged at Rothbury

Vibrational Sound Massage by The Conduit at Rothbury

Vibrational Sound Massage by The Conduit at Rothbury

Vibrational sound massage. Hmmmmm as a person who practices yoga, this sounded like a great idea (especially since it was free) so I gave it a try after watching this guy. There are two areas set up for this in Sherwood Forest at Rothbury and… Continue 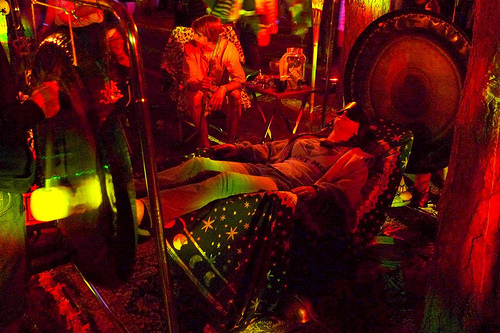 "Anyway, the next day my only goal was to catch Son Volt at 2:30, so there was a fair amount of time to just kick around. I happened upon a set of four large, stand-mounted, handmade gongs, inside the square of… Continue